This article is part of my Mentoring for Tops/Sirs/Doms/Masters curriculum.


UPDATE:  Here is an added review, for folks with shorter arms.


I teach a lot of folks about flogging, on both ends of the flogger.  I have found that the current economy makes it difficult for a new Flogging Top to build up his or her toy-bag.  When a good, dependable, quality flogger STARTS at $150, then it can be a stretch for somebody who doesn't yet have confidence in their abilities, but needs practice and some rave reviews of their personal style so that they can gain confidence.

This has bothered me for a while, because I want to see hundreds of Cocky Tops at our events, swaggering with a flogger at the hip, and thrilling the bottoms. I have loaned my own floggers out, and given away six floggers in the last nine months in an effort to encourage our newest, best Tops to practice, play and excite the boys.  This ain't a cheap habit, but I have considered it to be a fair trade, given that each man has gone on to gain greater status, visibility and confidence.

However, I'm getting less and less able to afford such a practice, no matter how noble the intent. 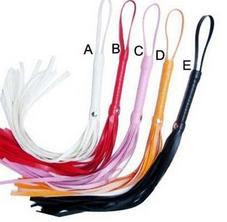 So, I started doing some research online.  While looking for used floggers on eBay, I saw an endless supply of crappy, flimsy, shoddily-constructed new floggers (usually made in China) that I wouldn't use for any reason.  They must be for show, because they simply don't have enough heft to get anybody's attention in any useful way. They also LOOK cheap as well.

I happened across a vendor that seemed to know what he was talking about (his write-ups on each flogger's page convey a sense of expertise on the topic), and he invited me to inspect his Web site.

I ordered several items from his inventory to see if less-expensive toys could match the effects of the more pricey floggers... 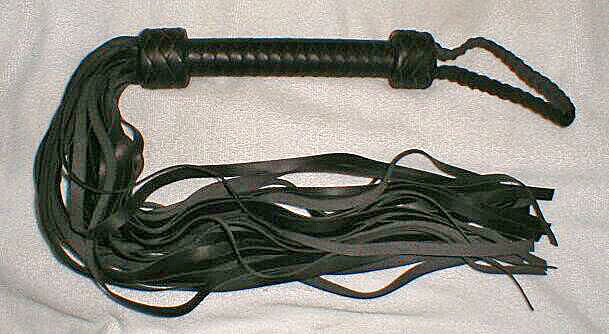 I received item #SL-06A, "Mr Thuddy", sold for for $45.  This one is my favorite.  Just the right weighting. If somebody wants to have just ONE flogger until more finances arrive, I can definitely recommend it. It has a nice weight, and can be used well very easily, even by beginners. The handle has a nice, grippy crosshatch pattern, and seems durable.

No, it's not as "polished" as the most-expensive floggers out there, but this isn't a status contest, it's a search for a practical, durable and affordable toy. 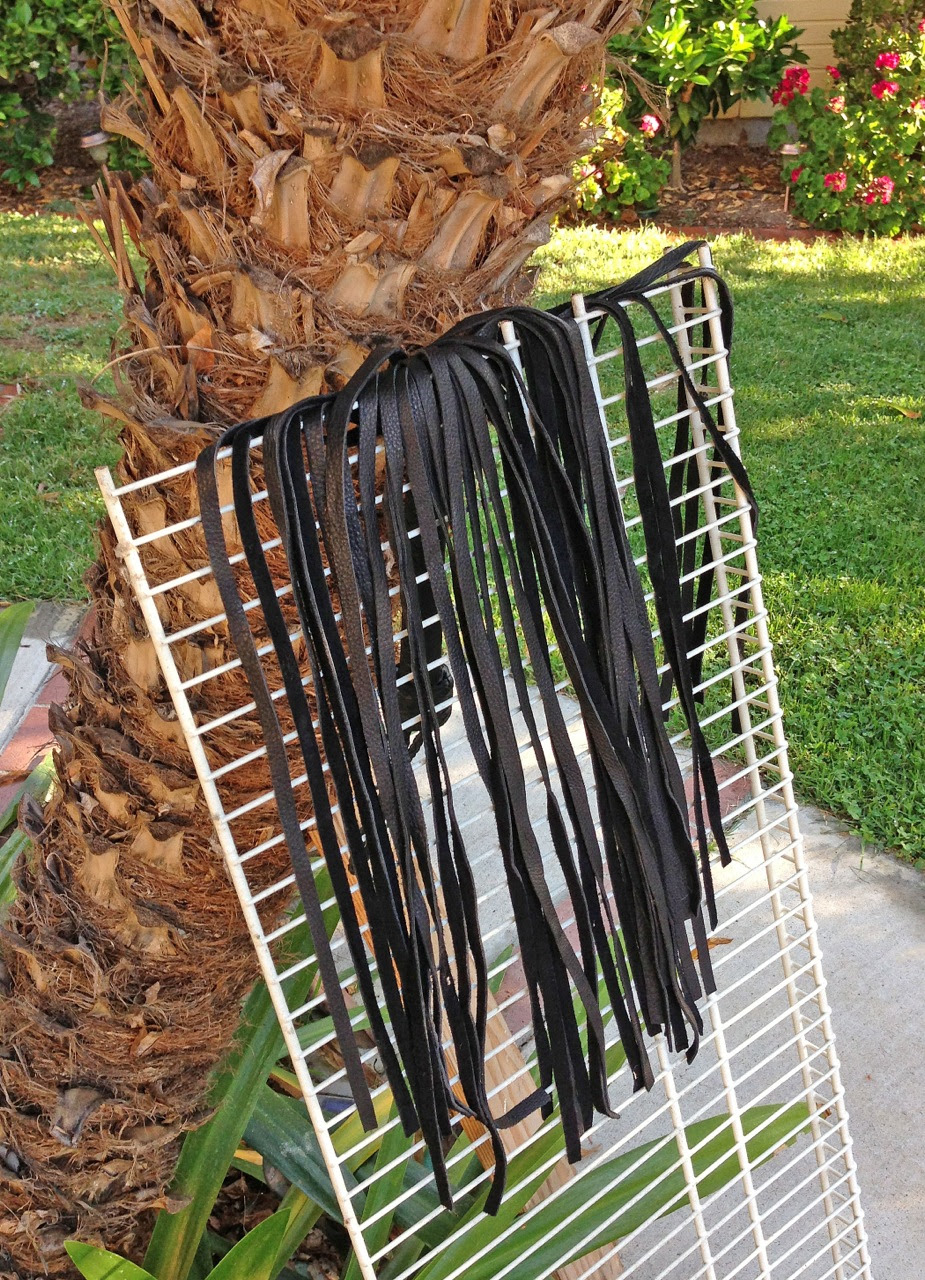 I DO recommend letting floggers that were purchased online sit outside in the fresh air when you first get them, though.  Floggers in stores spend a lot of time hanging on the wall, which allows the chemicals used in treating the leather to evaporate. My Mr. Thuddy arrived wrapped in plastic, which caused it to smell like Kiwi Shoe Polish until I aired it out in my back yard for a couple of days. 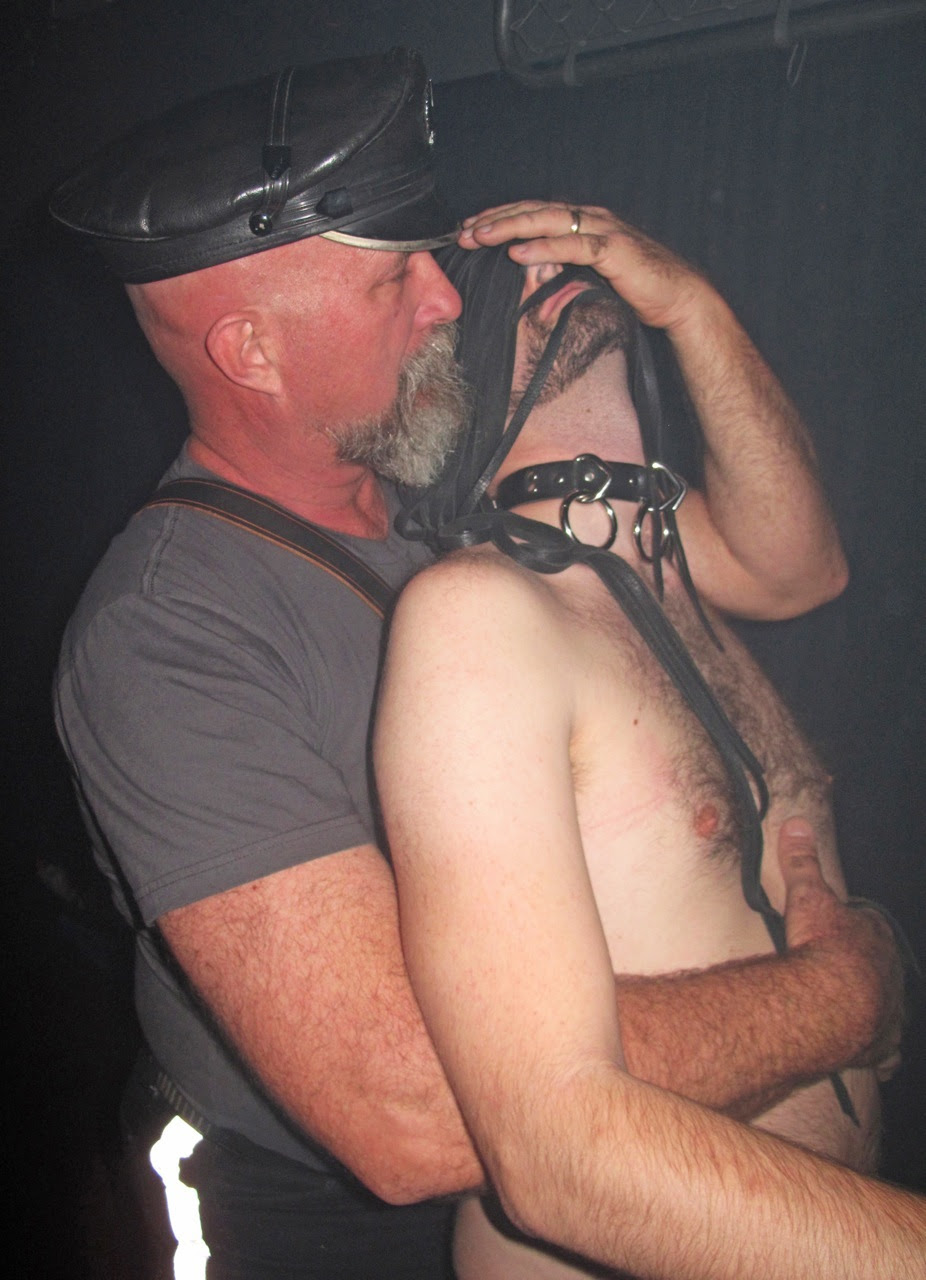 It is now nicely aromatic of leather, just as I prefer, when making my bottoms savor the effect. 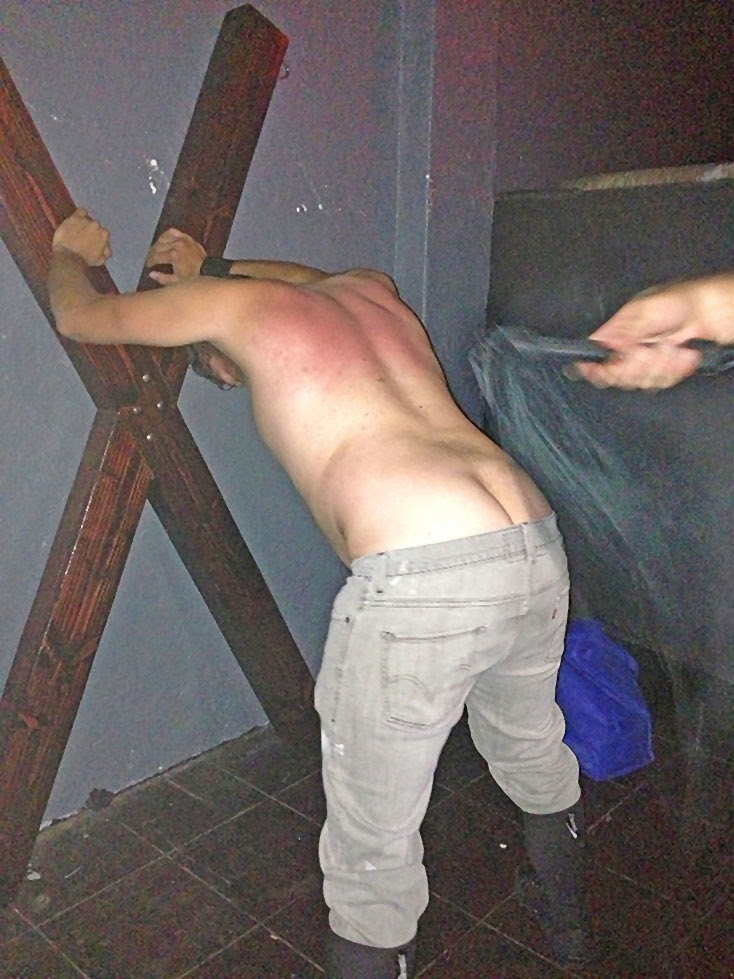 I recently spent an entire evening using ONLY the new Mr. Thuddy flogger on nine men, ranging from shy newbies to Heavy Players.  I also handed it away to other experienced Tops for their evaluation. We all agreed that it was easily the equal of floggers that we have seen, costing between three and for times as much.

I started flogging in 1977, so I know many, many different styles of throwing a flogger. All of them worked well with this item.  I'm not sure how well it would work for someone with shorter arms than mine (I'm 6'5"), in which case, I can also recommend… 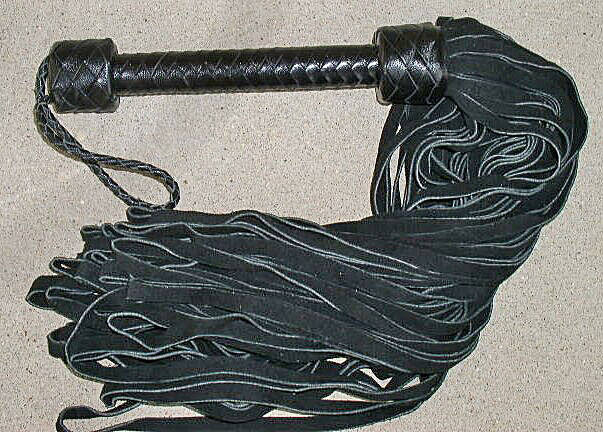 Item #HL-02A, The Enforcer II, sold for $39.95. It's a bit short for my tall-man body kinematics, but quite pleasant to use.  WELL worth the price. Good and thuddy. Nice for the price. 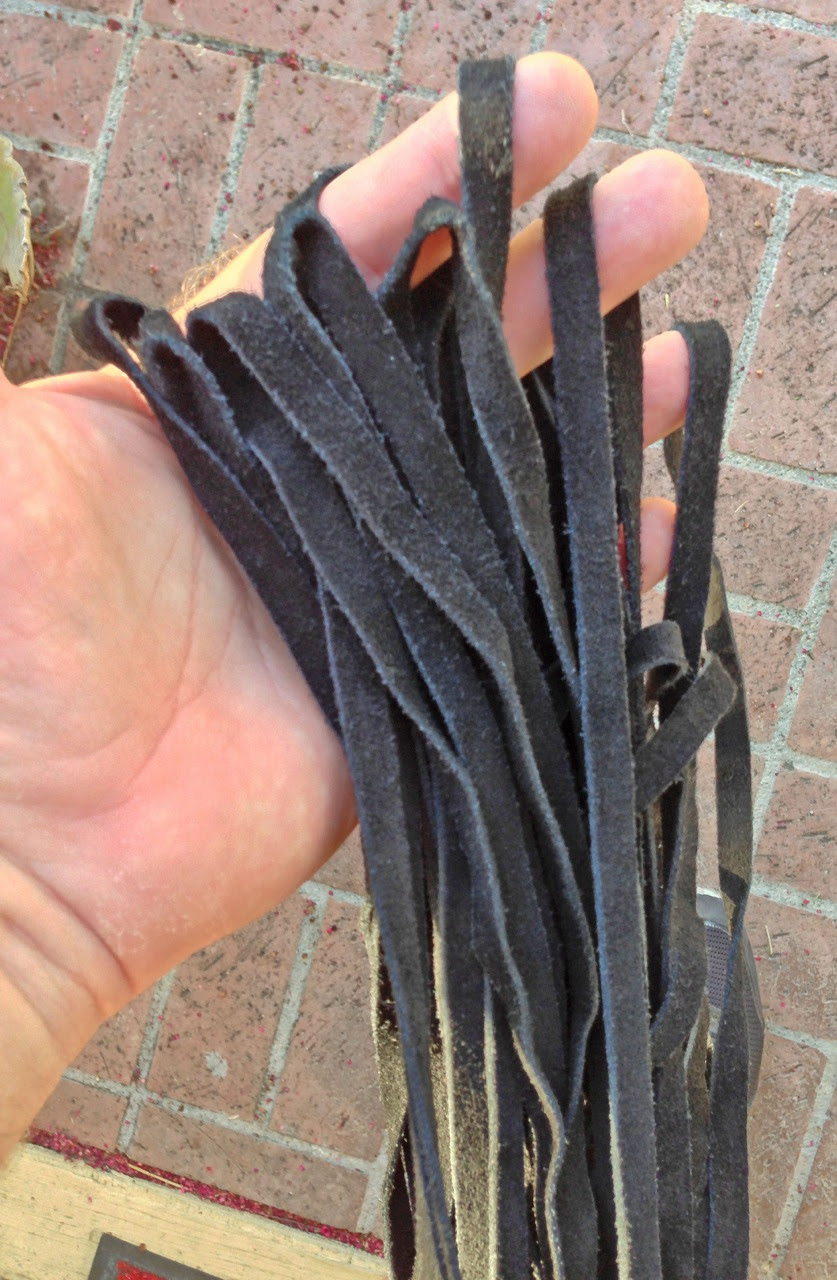 The only drawback is the loop design, which makes it harder to un-tangle.  You can't just run your fingers through it to de-tangle it. At that point, I MIGHT have kept handing it to the slave for complex, regular and manual two-handed detangling... 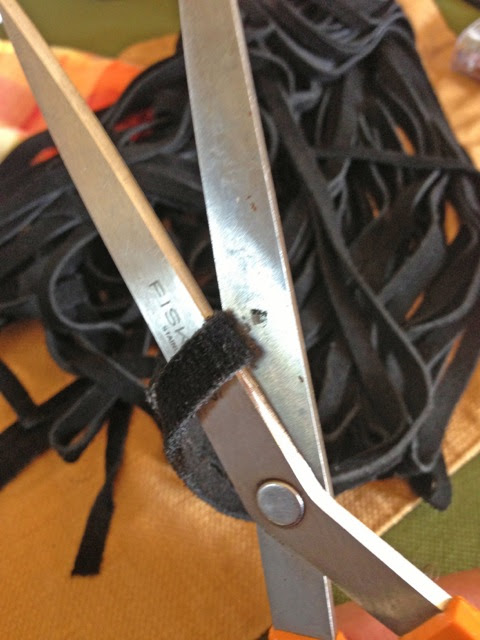 Instead, I just decided to cut each loop to become separate tails. It makes a VERY good "Mop Flogger," which is what I like to start beginners with. Very satisfying.  All thud, no sting, excellent weight. 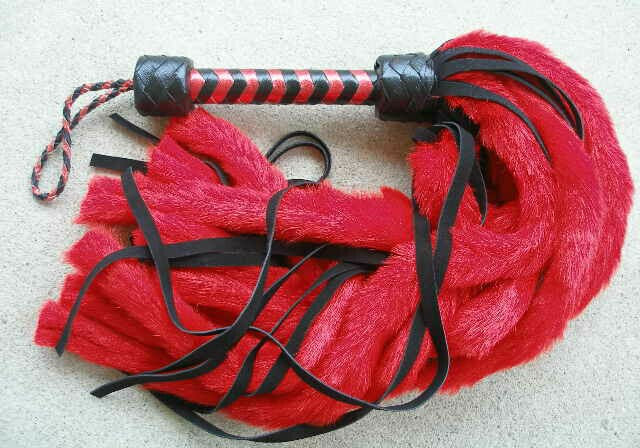 #FF-01 Red Whisper, $24.95. I just don't see the point.  Maybe it's an accessory for a Halloween costume, so that you can whack two year-olds to make them giggle?  It's less weighty than a Nerf Bat, which according to the Urban Dictionary, is "a soft, foam-rubber bat... Notoriously better at wounding the victim's pride than causing actual injury."

It's not going to get much use by me. The whole POINT of a flogger is to activate the Fight or Flight response, thereby triggering the release of endorphins.  I suppose that the Red Whisper COULD be used as a gentle, "tickling" alternate stimulus in between harder floggings with other toys.

But, that's what I have facial hair for.  Perhaps that is why I plan to give this one away. My toy-bag isn't big enough to include this flogger.

I will be ordering more toys from this vendor as time goes by.  In particular, I have my eye on the heavier ones.  The purpose of this particular shopping-trip was to evaluate on behalf of the new Tops in my local Tribe who 1. are on a budget and 2. need to become more proficient during our regular "Hands-On Demos". They already have dedicated coach (my well-trained buddies and me), and an opportunity to practice-practice-practice in a safe, welcoming environment for beginners.

Now, they have a place where they can get very good quality, yet inexpensive floggers to start their lifelong collection.

Posted by FetishMen SanDiego at 7:54 AM