Disclaimer from Papa Tony:
I DON'T MAKE A SINGLE PENNY FROM ANY OF THIS,
OR ANY OTHER WORK THAT I DO IN THE COMMUNITY.
My motives are pure, idealistic and brotherly.

I have been a heavy player for a long, long time. I have my biases, like anybody else. Since FetishMenSanDiego has come into being since June 2010, the local play-scene has included a LOT of "impact play", because that is what I teach (at least three or four days a week sometimes), and enjoy the most, personally.

I've written earlier articles about inexpensive toys.  We are currently enduring a terrible economy, and most of us generally aren't made out of money.  If it's a choice between an expensive toy and groceries, groceries always win. I like to help to avoid such choices.

I want my brothers and sisters in the kink community to enjoy the benefits of a nice, fat toy-bag, with the knowledge to USE the toys in their collection.

So, I took some initiative, and got the ball rolling on something wonderful.

I have worked with Steve at FlogMeBaby.com to assemble a delightful toy which may be new to most folks. It's called a "Tomcat" - a cross between a blacksnake whip and a Cat-O-Nine-Tails:

- It's an intermediate-level toy… Not as extremely "sting-y" as a singletail whip, and not as "thuddy" as a mop flogger.

- It leaves marks, but not unless you really work at it with intentionality. It does NOT break the skin. It would make a great prop for filming a pirate movie, since it doesn't really damage anything much. Looks impressive as hell, though.

- It's for the submissive who simply isn't getting enough stimulation from pure "thud".

I have seen Tomcats like this selling for as much as $430 online. I've owned one for about fifteen years, and it is a source of joy for all concerned. The one from FlogMeBaby.com sells for $49.95!  Quite a discount.

The more-expensive Tomcat that I've owned since around 1998 has a tighter weave, a more delicate feel, and more-polished finishing.  However, neither old or new throws any better, impacts any differently, or satisfies even one percent differently.  I'm delighted with both the old and the new Tomcats, equally. I have signed-off on the new one's design and manufacture. I have tested the hell out of the prototype, and have loaned it out to my most esteemed heavy-player buddies. They hate to hand it back.

I have one of the new Tomcats in my possession, and have taken it through several steps:

I have flexed it (and urged eager submissives to do it for me as well), so that it is silky-smooth in its delivery.  There are plenty of websites and authoritative Tops making firm, declarative statements telling you that intentionally flexing a toy to break it in is the worst kind of transgression.

After 37+ years in the hardcore kink scene, I have YET to see a whip, flogger or other toy explode into fragments, crumble into powder or snap off of a handle due to being flexed, early in its life. I have played with literally thousands of people, and have visited several hundred dungeons since 1977.

My reason for flexing a toy as soon as I get it is to get it to THROW ACCURATELY.  Handmade leather toys like this one have a natural curve.  Some folks like to "adapt" to the toy's idiosyncrasies.  Fine. They are welcome to do so.

I prefer to pick up a toy and have it adapt to ME. I despise having a toy suddenly YANK into a new, unpredictable direction due to the leather being tighter in one direction. Clipping the edge of a submissive's ear (when you were aiming for the shoulder-blades) is rude.

So, here is how I flex it (or get a submissive to flex it, to gain Boy Points):

If given a choice, I like to go to a non-leather gay bar - say, a twinkie video-bar, or a piano bar.  I will stand idly chatting with friendly people while flex-flex-flexing a whip, and they won't hear a single word that I'm saying - their brains will be 100% filled with thoughts like "What is he going to DO with that thing?"  It's the bratty sadist in me.

When the toy is flexible and floppy in all directions like a dead snake, it's just right.

You don't need a diploma in Whipology to be popular with a toy like this.  You just have to know a few things:

Practice with a pillow.  Get familiar with your new tool. Set it up in the way that I demonstrate with the pillows and the chest of drawers in the video. Put on your headphones, listen to an audiobook or some rocking' music and take your logical mind out of the equation.  To master a tool, it has to become automatic in its use, and only practice can do this for you. Lots of practice. No such thing as too much practice.

Once you have figured out how to fire off your new Tomcat accurately, striking within a VERY small area that you aim for, time after time after time, then be sure to review some great online tips on proper use of floggers and whips. The Internet is full of them.

Here are a couple of videos that demonstrate how I like to use a Tomcat while the submissive is:

THEN, if you live near San Diego, ask me directly for any final tips on polishing of technique. I'm a coach by nature. 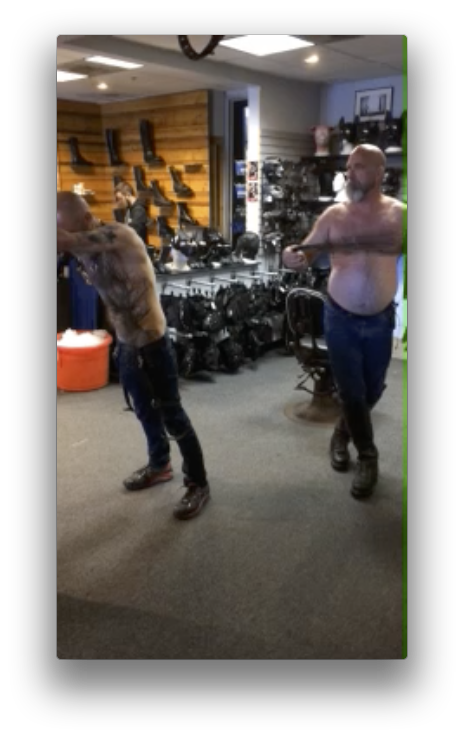 Sunday, July 27, 2014: Papa Tony demonstrates the Tommy Tomcat, during Dore Alley Street Fair 2014, at Mister S Leather.  It is more intense than a flogger, but not as intense as a singletail whip.  I get mine here.  More detailed instructional videos, here.

The gentleman had specifically requested marks upon his back, and the results can be seen here. I was "painting" his back with the Tomcat.  Afterward, he was very grateful.
Posted by FetishMen SanDiego at 4:31 PM